The Regime Of The True Masters 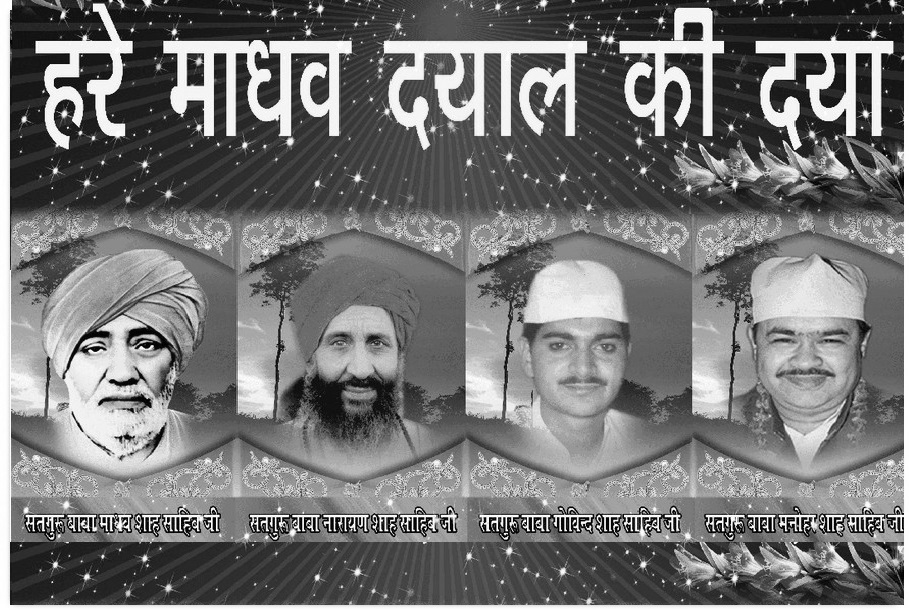 The Formless, Enlightened, divinely wise Complete True Masters incarnate era after era in this world for the welfare of humanity.  Their objective has been invariable irrespective of their names as per the time period and the country of their origin i.e. to enlighten the spiritual path for the souls of this world.

The Capable Complete True Masters proliferate the divine light in this world created by the Lord Almighty to expel the superstitious ignorance and take the long lost souls back to their real abode, the home of the Supreme Master.

The Complete True Masters do not align with any particular caste or sect. Just as the sun enlightens the world free from any prejudice, similarly the True Master too showers His divine grace equally over the souls to lead them to unite with the Supreme Lord.

The soul descends from the Hare Madhav Divine Realm with a debt and commandment to return back to its real abode. It promises the Lord that it will spend time in the divine true company and make efforts to get released from the debt but entering the world it indulges in the deceitful materialistic pleasures and forgets about its oath. When the divine True Masters arrive on this earth then they remind the souls about its pledge. The thoughts of humans are confined to the external domain. When they come under the shelter of the True Master then their thoughts gets purified and elevated above the ordinary intelligence of mind and the world. This is when he realizes that he can even gaze into the realm of the Supreme Lord. The human beings may acquire as many worldly tastes and pleasures but the pleasure obtained in the divine company is beyond the delights of this world.

The utterances of the True Master are full of a divine radiance and following it the individual soul realizes the enlightenment and experience the divinity in his life. The existent divine form of the True Master is the holy avatar of the great Lord Almighty of supreme spiritual realms. If we behold, He would appear as an ordinary human to our ordinary eyes. He talks like common beings, walks unpretentiously amongst His devotees, but in actuality, He is the Supreme Almighty in an ingenuous human form. He is the eternal being, eternal form, perpetual divine entity and resolute supreme authority. He purifies the human mind and untangles the tousled consciousness by divine prescriptions of human prosperity and deific holy sermons. He bestows the mortal realm with tranquility by means of worship and selfless service. Through His divine rubrics, sermons and many godly deeds, He blesses all souls with eternal peace. Beloved True Master tides the souls over through His spiritual supremacies and showers heavenly blessings on all free of any prejudice.

The Graceful True Master performs the deific deeds of macrocosm, microcosm and spiritual realm openly on this mortal land thusly that He confers ordinary beings, Gods-Goddesses and hermits with His self-attained spiritual sovereignties and relays all souls to the saintly realm.

The True Master institutes His divine decree for the liberation of souls from the deceptive state of chaurasi (eighty-four vicious cycles of births-rebirths). All the beings are healed of all their diseases and three kinds of maladies. The True Master brings serenity from His heavenly abode and grants it to the souls burning with the fire of ignorance persistently and gives holy sacrament of Mukti (liberation) to worthy souls. The first Guru Satguru Baba Madhav Shah Sahib Ji incarnated on 17th of August 1880 on the occasion of Ganesh Chaturthi at KAMBAR, district LARKANA in PAKISTAN. He was christened as ‘SAJANDAS’. His mother’s name was Tuli Bai and Father’s name was Khiyaldas.

His divinity would always remain immersed in the divine intoxication and keep awakening the souls through his divine playful acts. Unaffected by joy and gloom His divinity would remain engrossed in the veracity of the Soul and would always keep Himself hidden. He arrived in India in 1948 and purified the land of Katni Refugee Camp with His lotus feet, which is now known in his name as Madhavnagar and has become a great center for the selfless revcerence.

In the past, this area crammed with ghosts and spirits, His Holiness set free these evil spirits by walloping them with divine thumps & sticks and bestowed innumerable living souls with celestial serenity through His deific deeds.

His Holiness enlightened all beings with holy deeds all His existence. Hermits, saints and wise beings knew the mysticism of His Holiness and worshiped Him devotedly but didn’t grasp His high sermons that acutely. The truth is that it is outlying from the psyche of ordinary beings to understand the heavenly acts of such Grand Complete True Masters.

His Divinity Babaji would direct the beings to take up the worship of the Divine Lord residing within. The congregation, singing of hymns and spiritual songs, mass dining would regularly be organized.

The Divine True Master Baba Madhav Shah Sahib Ji chose on His own sweet will the day to relinquish this mortal world and renounced on 1st of January 1960. His divinity explained to the souls that the ultimate truth which they seek in the hollow practices of the outer world actually resides within them only. Thus He proclaimed –

His divinity would always advise His devotees to strive for the attributes of modesty and equality so as to embellish the humanity. Abstain this body made of five elements from the dishonest thoughts; attach it with the Holy Word of the True Master in order to achieve the perennial pleasure. Live a detached life following the example of the Lotus flower and remain immersed the love of the True Master.

Satguru Baba Narayan Shah Sahib Ji had immense love for his Guru Satguru Baba Madhav Shah Sahib Ji. Satguru Baba Narayan Shah Sahib Ji transformed the region of Katni Tikuri Camp and renamed it as “Madhavnagar” in the memory of His Guru. Babaji also got constructed a grand entry gate at the ingress of Madhav Nagar so as to remind the visitors of His Guru’s pious name. He laid the foundation of ‘Madhav Nagar Road’ railway station and facilitated the construction of Baba Madhav Shah Bhavan (Guest Home) to provide a free stay for the visitors.

Realizing the medical needs of the people of Madhav Nagar and Katni His divinity Babaji facilitated the construction of Baba Madhav Shah Hospital in order to provide free and subsidized medical aid to the needy and downtrodden sections of the society. Eye-checkup, health checkup and operation camps would be organized periodically. A public garden named as ‘Baba Madhav Shah Udhyan’ was also opened for public health and recreation.

His Divinity Satguru Baba Ji remained extremely compassionate and popular amongst the deprived. Baba Ji established Baba Madhav Shah Sewa Mandal in 1961 to support the shelter-less and needy families with food, clothing and shelter. This selfless organization distributes grains, utensils, quilts and other items of household utility to the needy.

Unification with the Divine Light

His divinity visited the holy city of Mathura on a sacred journey in 1982. He wrote the date of His abandoning this mortal world three years prior to the destined day and renounced His body to unify in the Divine Light on 10th October 1985.

Third Guru was an enlightened youth inspiration, dedicated devotee His Holiness Satguru Baba Govind Shah Sahib Ji was incarnated on 4th of July 1971 in Katni, Madhya Pradesh in the home of mother Yashodha Devi and father Shri Ramchand Jaisinghani. His divinity was called BALRAM in His childhood.  He always stayed in the communion of Supreme Lord and exemplified it for the disciples too. His Divinity Baba Ji furthered the services of human welfare initiated by Satguru Baba Narayan Shah Sahib Ji and inaugurated the Madhavnagar Railway Station. His Divinity unified in the Divine Light on 24th of November 1992. He enlightened the beings to hear the ever-sounding “Divine Rhythm” within themselves by remaining quiet. His Divinity would always remain immersed within His eternal-self. In His Holy presence, the Hare Madhav Chikitsalaya (Hospital) came into practice for the welfare of public also the renovation of Baba Madhav Shah Bhavan and Guru Darbar Sahib’s was accomplished. Furthering the holy tasks of selflessness His Divinity unified in the Divine Light on 28th of July 2002.